One of my on-going projects is building Warhammer 40,000 (40K) armies in 15mm scale.  (Check out my Displaced Miniatures page in the links sidebar to see my 15mm Space Hulk figures.)

Here's my take on a heavy walker for the Imperial Guard, based on a very slightly modified Gear Krieg walker by Dream Pod 9.  The modifications consist of adding a sci fi las-cannon end to the main-gun barrel, adding a couple Imperial aquila symbols, a crude attempt at sculpting a Guard helmet on the crewman, and the sci fi base, and a few other details.  I converted and painted this for the "Iron Painter" competition run by Wyrd Miniatures about a year and a half ago.  I managed to advance to the second round, but probably only because my first opponent was the only other contestant painting 15mm miniatures.


The turret has a red-white-red identification flash on it.  A common feature on Imperial Guard vehicles, and inspired by British practice in both World Wars.  (The practice ended early in World War Two, when it was noticed that the ID flash made a convenient aiming point for Axis gunners.) 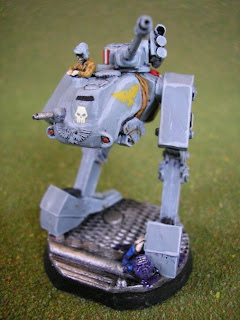 Here are a few detail closeups: 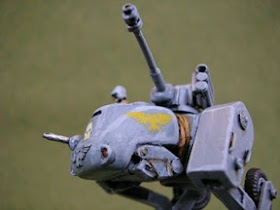 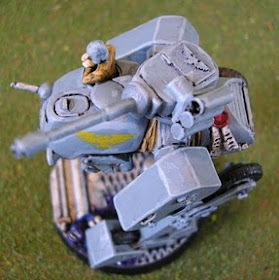